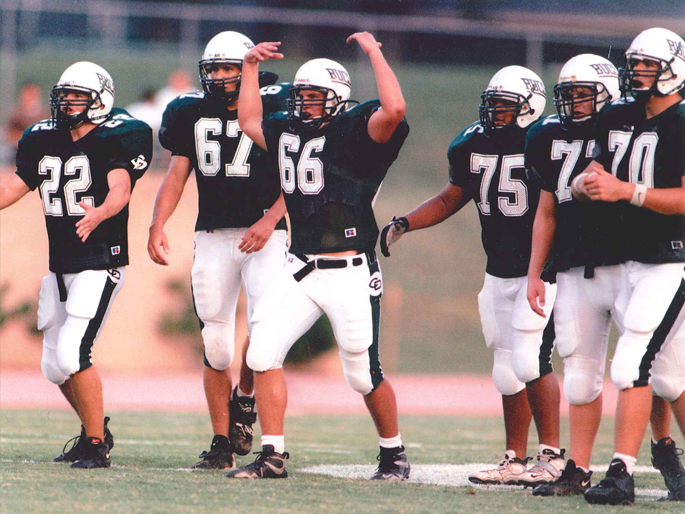 I was lying on a gurney in pre-op, waiting for the anesthesia to put me under for eye surgery, when our son called. “Mom, Coach Vaught said he would postpone our home visit since you’re in the hospital.”  “No, Christopher, tell the Coach it’s outpatient surgery and to come tonight as planned.  Your Dad and I will be there!” This was our son’s best chance to play D1A football and the United States Naval Academy provided a remarkable education to boot. My husband and I weren’t going to take the chance that another recruit and his family would woo the Navy coaches away, and offer someone else the coveted scholarship that our son ached for.

Since I had a Sports Marketing and PR business, and had worked with some of the highest caliber D1A teams and coaches, I knew the drill.  Recruiting is the life blood of every program and I had been helping coaches recruit other mothers’ sons for years. I was well aware of how fragile the home visit could be.  Our son wasn’t the caliber of player to compete for the programs I had worked with, but like any Mom, I would do what I could to boost my son’s chances however I could. I asked my clients at Tennessee, Notre Dame, Texas, Ole Miss and others, which coaches they would have their own sons play for, and which ones they would steer away from.  With an average of 8% of high school players ever making it to play at the college level and much fewer at the highest FBS level, this home visit could be a dream maker or dream breaker.

With a black and blue face, my eye swollen shut and my head fuzzy at best, my husband and I wrung our hands under the table as our son and the coach talked expectations and realities. An hour and a half later, Coach Vaught shook Christopher’s hand and said, “We want you to play at the United States Naval Academy.”  I seriously wanted to give the man a bear hug, and call the Charlotte Country Day School Coach to say his team captain would be their next college football player!

There are lots of things Moms and Dads never thought to worry about if their son gets sucked into the cyclone called college recruiting. Then there are the predictable worries that wake them up at night:

Keep Parents Up at Night

A FedEx Package For You

I’ll never forget the pride in Christopher’s voice when he called and said the school office sent a note: “There’s a FedEx package at the office for you”  with his Letter of Intent to be signed and faxed back… yes, back then it was faxed, and there was no electronic signature!

It was a few long months until National Letter of Intent Day. Back in 2000, there was a lot less de-committing and Signing Day was more of a formality.  The hat ceremony at school said it all. There was no question where he would go. It was official – Navy, here we come!

A year later I was in Austin to conduct media training for the University of Texas Longhorns but the night before, then head coach, Mack Brown asked me to come to his staff meeting first. “Kathleen, I need you to tell my staff what it’s like to be the parent of a D1A player. They need to understand.”  Looking them in the eyes I started… “I got in here at midnight last night but before I went to bed, I got on the computer to see what had happened at Navy’s practice yesterday…” The worrying never stops, but neither do the expectations or pride. My newest sweatshirt read: Navy Mom.