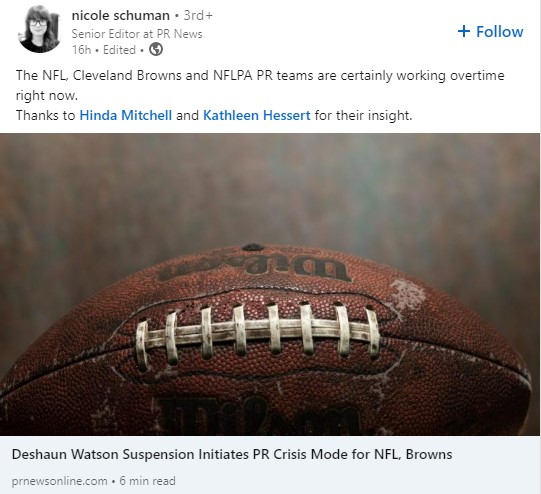 The long-awaited announcement on NFL quarterback Deshaun Watson’s fate arrived this morning (Aug. 1) with a thud. A retired federal judge that the league and players’ union appointed suspended Watson for the initial six games of the 2022-23 season without pay. The ruling came following accusations of Watson’s sexual misconduct with 24 female massage therapists.

While some fans of the Cleveland Browns were relieved, a majority of social media chatter and sports news network talking heads were enraged.

Many saw the suspension, issued without a fine, as a slap on the wrist. They argue it’s in-line with lesser charges, like Tom Brady’s Deflategate fiasco (4 games), but should not be.

On the other hand, it’s not on par with the 2018 suspension of Mychal Kendricks, a Seattle Seahhawks linebacker, who lost eight games for insider trading.

Moreover, Watson’s record contract is structured favorably; his suspension will constitute only a mild financial hit.

Not surprisingly, many critics see Watson’s 6-game penalty as a significant problem for the league, which boasts a 47% female fanbase (2020 data).

The NFL released a statement this afternoon, thanking the retired judge, but also acknowledging it has three days to appeal the decision. Its statement had not appeared on the NFL’s social media channels as of 5 p.m. ET.

The Browns’ owners also released a statement, acknowledging the situation and stakeholders, but did little to quench the bubbling media frenzy. 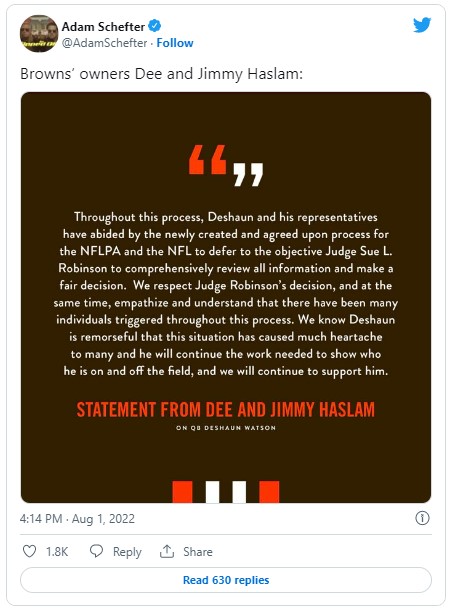 Time is short for the NFL. Releasing a statement is a start, but the league must address the public outcry, says Kathleen Hessert, founder & president, Sports Media Challenge, a reputation management and social media consulting firm.

To protect the league’s reputation, the NFL “should move fast and appeal the decision,” Hessert says. That means NFL commissioner Roger Goodell or a designee likely would add games to Watson’s suspension.

Reports say Watson and the NFL Players Association (NFLPA) would fight an NFL appeal in court. Late yesterday, the NFLPA urged the NFL to skip an appeal.

Still, Hessert likes the NFL appealing. “The backlash and cost [of not appealing] would be much less than what they’re facing with the arguably light suspension. The commissioner’s job is different from an arbiter—he needs to protect the league, owners, etc.”

[The league should not] assume it knows what stakeholders think, Hessert says. Instead, “data analysis and business intelligence” will show in “real-time what the facts versus the noise is.” The NFL can then “quickly and carefully craft messages to reach and influence the important audiences.”

One Step Forward, Two Steps Back

Since the racial uprising after George Floyd’s murder in May 2020, the NFL arguably has become more inclusive. Its most significant act was reforming hiring practices of coaches.

On the other hand, critics argue the hiring policy changes of March 29 were a reaction to the Feb. 1 lawsuit of former head coach Brian Flores.

In addition, since Floyd’s murder the NFL has posted social justice messaging and conducted outreach in inner cities.

Data from the Institute for Diversity and Ethics in Sport (TIDES) say during the 2021 NFL season women were:

Women Employees and The Suspension

The Watson suspension may give NFL female employees pause. Hinda Mitchell, president, Inspire PR Group, says “the actions of the NFL and its teams consistently do not align with the values they state—or with the values of their critical audiences.”

She believes this could result in a loss of trust, which will need correcting.

“Finding just the right words to communicate about this matter—and making changes to how [the NFL acts] going forward—will be critical. They [always] make a strong position about women’s rights, but then the actions of individual players undermine their work.”

What’s Next for Browns’ PR?

Anyone following the Watson story knows the stress it put on the Houston Texans–Watson’s former team. The Browns acquired Watson in a March 2022 trade, but also inherited his PR crisis.

It will be interesting to see how the Browns address Watson’s situation. First, with the suspension decision, next during the suspension, and finally when Watson gets on the field after six games.

Mitchell says the Browns’ 2022-23 season may become more about one player than the team.

“It will be a rare day when Watson’s name is mentioned without some reference to these cases–language like ‘Watson, who faced criminal and civil suits’ or ‘beleaguered Browns QB,’” she says. “And with one case still unsettled, the potential for continued narrative is high.”

Similarly, the story will continue should the NFL and NFLPA battle in court.

“There will be those who want to keep the story alive by continuing to talk about it, whether through articles, game-day signs, protests or more,” she says. How will teams and fans outside Cleveland react? “The Browns may not get a warm welcome,” she adds.

Mitchell advises the Browns address fans with words and action as the team seeks to retain and or regain trust.

“I expect fans will be looking for some kind of specific actions that reassure them of the Browns’ intent to make meaningful change, especially as it relates to women and to the expectations of their athletes as role models and respectful, caring citizens.”

Also not lost on the public is the NFLPA’s role, Watson’s teammates and other league players, who may want to speak out about sexual misconduct and women’s issues. While typically the NFLPA is not highly visible, those it represents are. Players will be aware of that.

“What will be critical for both the NFL and the union is to make a strong statement about their positions on violence against women and to put measures in place to educate athletes and others in the organization about the issue,” Mitchell says.

In addition, she expects some players will denounce Watson publicly.

“This case has negatively impacted the reputation of the entire professional football industry—and there are some players who will want to draw a bright line between themselves and Watson.”

Nicole Schuman is senior editor for PRNEWS. Follow her @buffalogal